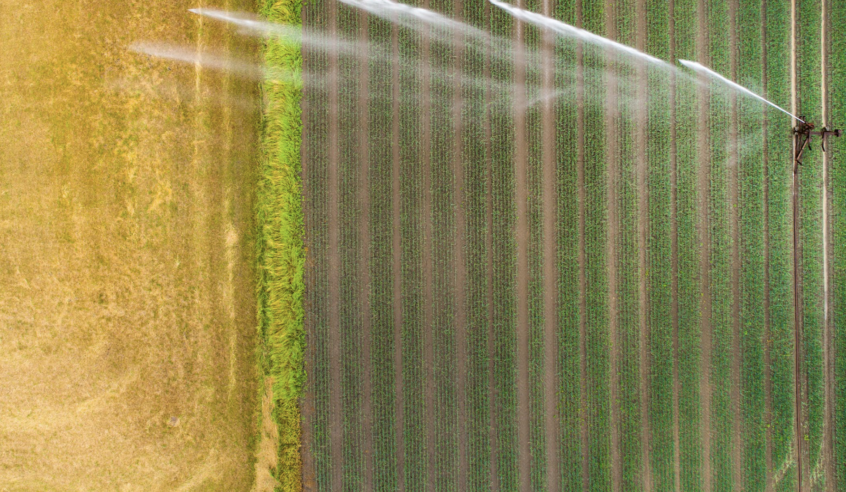 Recently, I came across an old Bloomberg interview with Michael Burry, the hedge fund manager played by Christian Bale in the movie “The Big Short”. At the time of the interview, Burry was concerned about inflation and identified the investments he was making in anticipation of that environment. It turns out Burry’s concerns about inflation were a few years early, but if you recall, Burry can sometimes be very early with his investments.

Agriculture land with water on site will be very valuable in the future, and I have put a good amount of money into that”. Burry went on to say “food is the way to invest in water. That is, grow food in water-rich areas and transport it for sale in water-poor areas. This is the method for redistributing water that is least contentious, and ultimately it can be profitable, which will ensure that this redistribution is sustainable.

Some Water Facts from the US Bureau of Reclamation:

According to a study by the University of California, that relied on data from NASA, a third of Earth’s largest groundwater basins are being rapidly depleted by human use, with little data about how much water remains in them. This means that significant segments of Earth’s population are consuming groundwater quickly without knowing when it might run out, the researchers concluded. The study notes that the dearth of groundwater is already leading to significant ecological damage, including depleted rivers, declining water quality and subsiding land. Farming regions such as California and the US Midwest rely on aquifers for water, and no one knows how much remains in those aquifers.

A recent Bloomberg article explained how China faces a water shortage. The country was once nearly self sufficient but has blown through many of its resources and has become the world’s largest importer of agricultural goods. Its arable land has been shrinking due to degradation and overuse. Its water situation is even worse. China possesses 20% of the world’s population but only 7% of its fresh water. Thousands of rivers have disappeared, while industrialization and pollution have spoiled much of the water that remains. By some estimates, 80% to 90% of China’s groundwater and half of its river water is too dirty to drink; more than half of its groundwater and one-quarter of its river water cannot even be used for industry or farming. Shortages and unsustainable agriculture are causing the desertification of large chunks of land. It also means they lack the water to grow enough crops for their population and need to look elsewhere around the world. Specifically, they need crops grown in regions that have access to freshwater.

Our access to water in Ontario is unparalleled in the world. Besides regular precipitation, we are surrounded by the largest bodies of freshwater in the world, with lots more available from creeks and streams as well as underground water. This differentiation is increasing every year, as access to water becomes more challenging for other areas of the world, making food production more difficult. As our comparative advantage becomes greater and the scarcity of quality farmland such as the kind we acquire and manage for investors, increases, this farmland should become even more valuable.

The drought conditions in North America over the past few years and the trend towards warmer temperatures is resulting in drier and more challenging conditions. This is precisely the reason AGinvest Farmland Properties Canada Inc. has such a keen focus on Ontario. We looked at a comparison between Chatham, Ontario, where we are headquartered and Bakersfield, California, just north of Los Angeles. 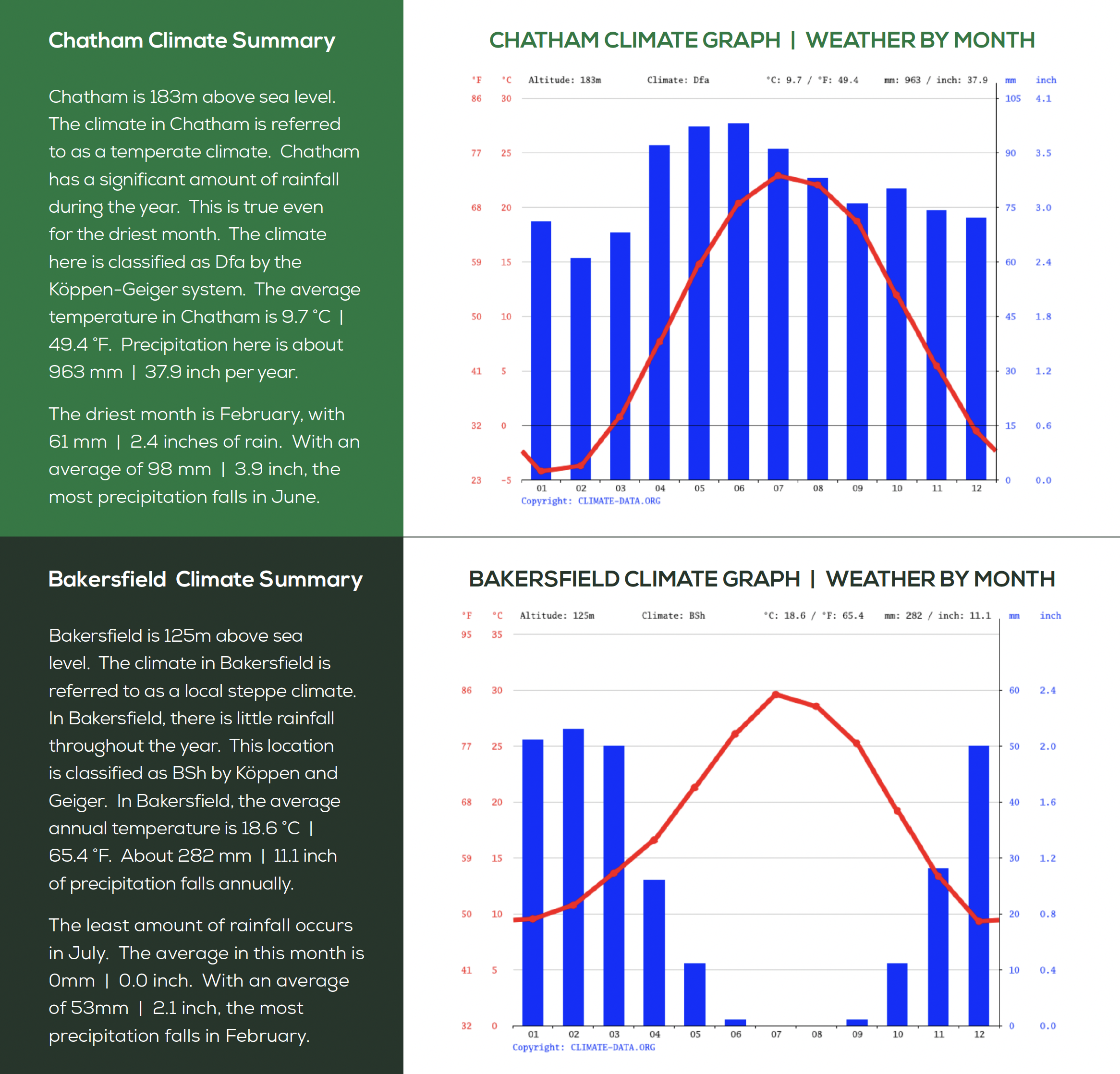 According to Climate-data.org, which uses more than 1.8 billion data points and collected data between 1999 and 2019. 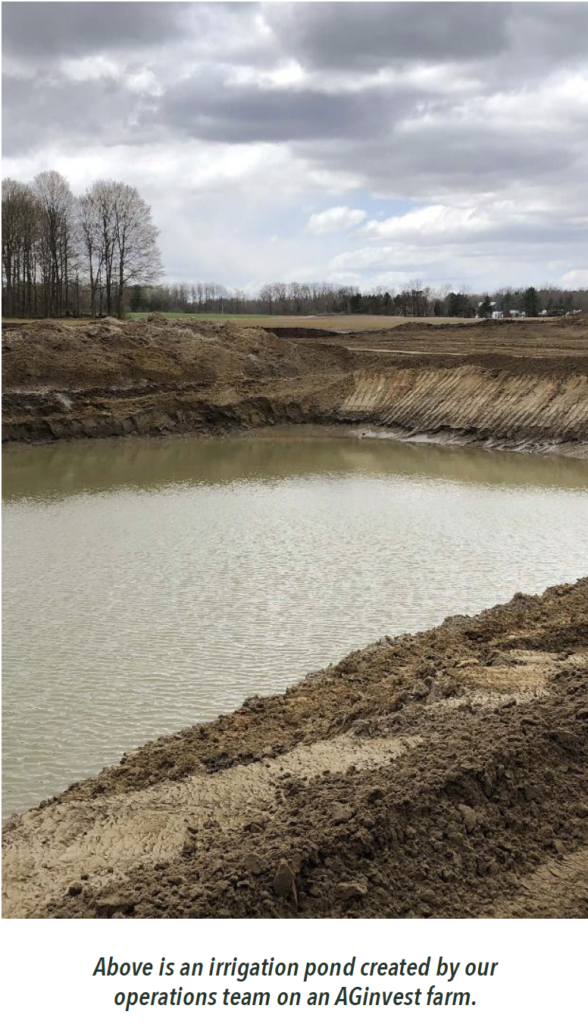 While farmers across much of North America struggle with water/drought issues, most Ontario farms have an abundance of water available. Plentiful rainfall as well as access to sources of fresh water, means Ontario farmers don’t generally need to worry about water. While rainfall is not usually an issue for our farmers, at AGinvest, we also look to add additional sources of water wherever possible, especially for farms with a sandier soil that doesn’t hold water for very long periods.

Before investing in farmland, investors should understand the importance of water to farming. Good soil without water won’t make for good farmland, let alone a good investment. Sophisticated investors like Michael Burry have correctly identified farmland as an asset to own during periods of elevated inflation, but that farmland needs water to be productive and remain valuable. Burry has also been investing in water as an asset class, recognizing that freshwater sources are becoming scarcer. In Ontario we export our fresh water through the fruits and vegetables we produce. Food and fresh water are critical to any society. Ontario farmland is a means to owning both. AGinvest provides investors a vehicle that allows them to own this valuable and increasingly scarce combination.

This information does not constitute financial or other professional advice and is general in nature.

It does not take into account your specific circumstances and should not be acted on without full understanding of your current situation and future goals and objectives by a fully qualified financial advisor.