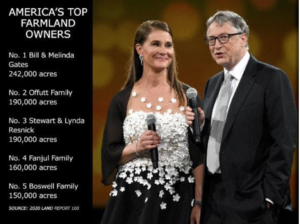 A recent Forbes article reported that Bill Gates, billionaire investor and co-founder of Microsoft, has become the largest private farmland owner in America. What makes this news even more surprising is that there have been record inflows into technology funds over the past year. So, while investors have been scrambling to invest in technology, driving prices and valuations higher, one of the wealthiest men in the world, and a guy who knows a little something about technology, was busy accumulating thousands of acres of farmland…weird, right?

But it might be worth considering the environment we are in and what likely drove Bill Gates’ decision.  Ever since the financial crisis, central banks have been printing money to buy assets to push the price of those assets higher.

I’ll try not to go too far down this rabbit hole, but if you think about money, it is meant to be a “store of value” that represents the value of work you have done. We use that money to buy the things we need/want. The difference between the money earned and the money we spend is our savings and effectively makes up our wealth. That seems straightforward enough, except that for the past 40 years, some other things have been going on that are coming home to roost. The cost to borrow money has continuously declined since rates peaked in 1981, but especially when recessions hit. Each time, central banks lowered the rate of interest which effectively bailed out the debtors. It also allowed more and more debt to be created (effectively creating more money) at lower costs. The combination of more money available and lower interest rates meant asset prices went higher. That all worked smoothly for years because there was room to lower rates further. Then came the financial crisis and central banks were forced to push rates down to zero, buy bonds to ensure rates stayed low and conjure up money to buy those bonds. Again, lower rates with more money meant asset prices went higher. After all, they told us that was the goal. But now, interest rates are negative in real terms (net of inflation) for most developed countries, negative in nominal terms in a lot of those countries and requiring a lot more printed money to maintain.

But what is the value of money conjured up out of thin air by the governments and central banks? There is no work involved, no service provided and no production of goods. This money has no intrinsic value, except for the fact that we all continue to have faith in our currencies. If governments continue to produce more and more currency in this way, people begin to figure out that it might not be worth what they thought it was. After a while, smart investors realize that they better own less of the stuff governments make with a simple keystroke (money) and more of the scarce stuff that you can still buy with that money (farmland?). Smart investors also understand that markets have become like a drug addict that requires more and more money at a lower and lower cost. In real terms, the cost to borrow money is negative and central banks are conjuring up hundreds of billions more each month. How can it possibly not be worth less and less???

The chart below is one I have referred to in the past.  It shows the S&P500 as compared to corporate earnings. While you would expect there to be variations from time to time, the earnings growth should be what drives the index higher. Instead, the S&P500 has been climbing without any fundamental support from higher earnings. In fact, earnings have remained flat since 2012 while the S&P500 has continued to rise. As the rate of money growth increased, the spread between the two has widened. All that extra money had to go somewhere, so it forced prices higher, even though there were no incremental earnings to support it. Is real wealth creation happening?

Truth be told, there are no examples in history where hyper-expansions of the money supply have led to good outcomes. Historically, printing money at this rate has been the signal for smart investors to buy real assets, like Bill Gates is doing. All this money printing and negative real rates has created many pricing distortions across asset classes. Last time I checked, there was $18 trillion of negative yielding debt in the world, we have IPOs for companies with no earnings and we are seeing extreme pricing of speculative assets. The chart below shows what has happened to an index made up of “non-profitable U.S. companies in innovative industries”.

The next chart shows more than 40 years of money supply as compared to the market capitalization of the US stock market. As you can see, the increase in money supply was tame before the financial crisis but has accelerated ever since and is now parabolic. 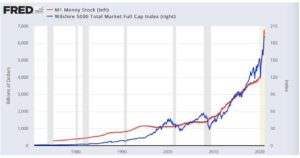 Unfortunately, debasing money incentivizes people to speculate and not produce. It might explain why we are seeing so many TikTok videos and YouTube ads from twenty-year-olds telling us how easy it is to make money in the stock market. These videos show very young adults talking about not having to get a 9-5 job and suggesting the Federal Reserve will keep printing money ensuring stocks continue to go up. The prospect of massive wealth gains and the fear of missing out is enticing many to join in, while social media makes it easy for them to organize and share their stories. So, if all these young kids can make money so effortlessly investing in these stocks, why isn’t Bill Gates investing like the cool kids???

Bill has instead directed his focus to amassing the single largest portfolio of farmland, a real asset producing real goods that society needs. Farmland has experienced a dramatic rise in production yields over the past 70 years as breakthroughs in mechanization, technology and genetics made their way to the farm. Given the amount of money being invested in R&D and AGtech funds all looking for more innovations, that growth in production per acre is poised to continue.

Maybe Bill figured rather than paying more and more for companies that do not actually make any money, he might be better off owning an asset that produces more and more each year.  It is an asset that will produce more of the products we require and that will not be displaced by a new technology. 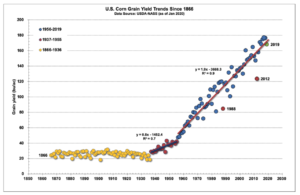 As an asset class, farmland has proven to be one of the best inflationary hedges.  The returns on Ontario farmland from 1970 to the end of 1981 came in at a 15.6% CAGR (based on StatsCan data) while the S&P 500 returned 2.2% CAGR over that same period.  In real terms, the S&P 500 lost half its purchasing power during that time.

Maybe Bill observed how resilient an asset farmland proved to be in a year like 2020, and concluded it was an asset that will do well in all economic environments.  Or maybe he realized the importance of ensuring we have a secure and stable food supply going forward and wanted to make certain it was held in strong hands that would take care of this precious asset.  At AGinvest, we think about that every day, so we have a pretty good idea of what Bill may have been thinking.

If it is not yet obvious that higher asset prices fueled by printed money is not actual wealth creation, then go back and look at indexes from places like Zimbabwe and Venezuela when they got their printing presses going.  If printing money in this manner and indexes going parabolic was true wealth creation, those countries would be two of the richest countries in the world.  Given the monetary environment we are in, you should probably look to build real wealth and own some real “productive” assets…. and “be like Bill”.