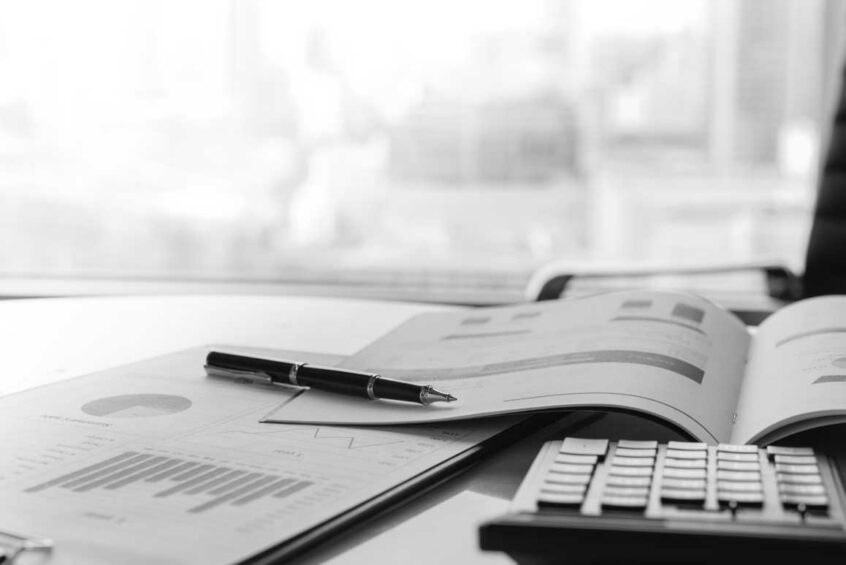 Since the beginning of the year, equity markets have been under pressure as central banks try to get inflation under control. The highest beta, or most speculative investments, seem to have suffered the biggest correction in percentage terms. This group includes tech stocks (i.e. Nasdaq), meme stocks, SPACs (Special Purpose Acquisition Companies or “Blank Check Companies”) and of course crypto currencies. The common thread these investments share is that they have a (large?) speculative element to them. These types of investments all benefit from an environment of high liquidity (easy money) where fundamentals are less important. Once you remove the liquidity, these types of investments begin to sink, much like draining water from your bathtub causes all your rubber ducks to wind up at the bottom of the tub. The correlation between crypto currencies and tech stocks looks like it was highest when both were rising quickly and again when both were dropping quickly. 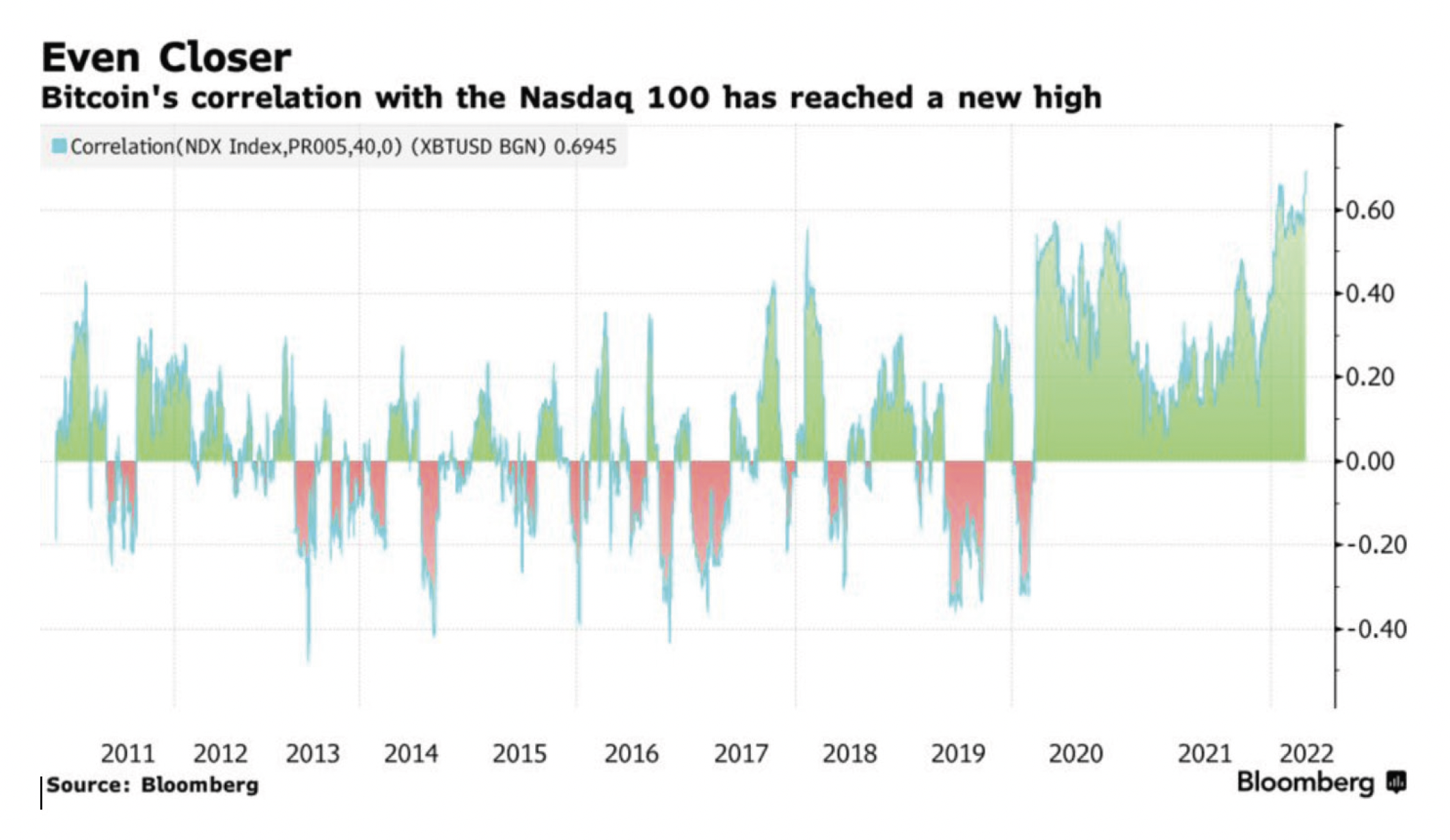 The point is not to pick on these asset classes, but to understand that when you are investing in such assets, you are riding the wave of liquidity, and when that liquidity is removed, you could be in for a sudden decline. At AGinvest, we invest in farmland. Most farmland (more than 98%) is owned by farmers, which means farmland prices are driven by fundamentals. A farmer doesn’t buy a farm to flip it, or day-trade it. A farmer only buys a farm if they think they can generate positive returns from owning that farm. Now compare that to a retail investor trading on a “no-fee” trading platform or a hedge fund using leverage, looking to generate high performance fees.

Farmland has seen a steady increase in productivity and efficiencies over the past 70 years. It began with improvements in mechanization and the improvements continued into biology with modifications in farming practices and seed technology. The combination of these changes has led to consistently higher values for farmland. Except for a few years in the early 1980s, when interest rates spiked causing some farmers to lose their farms and for prices to drop, the trajectory of farmland prices has been consistently higher. So, it seems highly unlikely that farmland would drop 35% in only five months if farms continue to produce food and food prices don’t see a dramatic drop. The chart below shows what has happened to farmland prices in Ontario, where we like to focus our energies, and where there is an abundance of water. As you can see, with only a few exceptions, the returns have been consistently positive, and those few exceptions when they were negative, the worst year was barely 8% in the red. 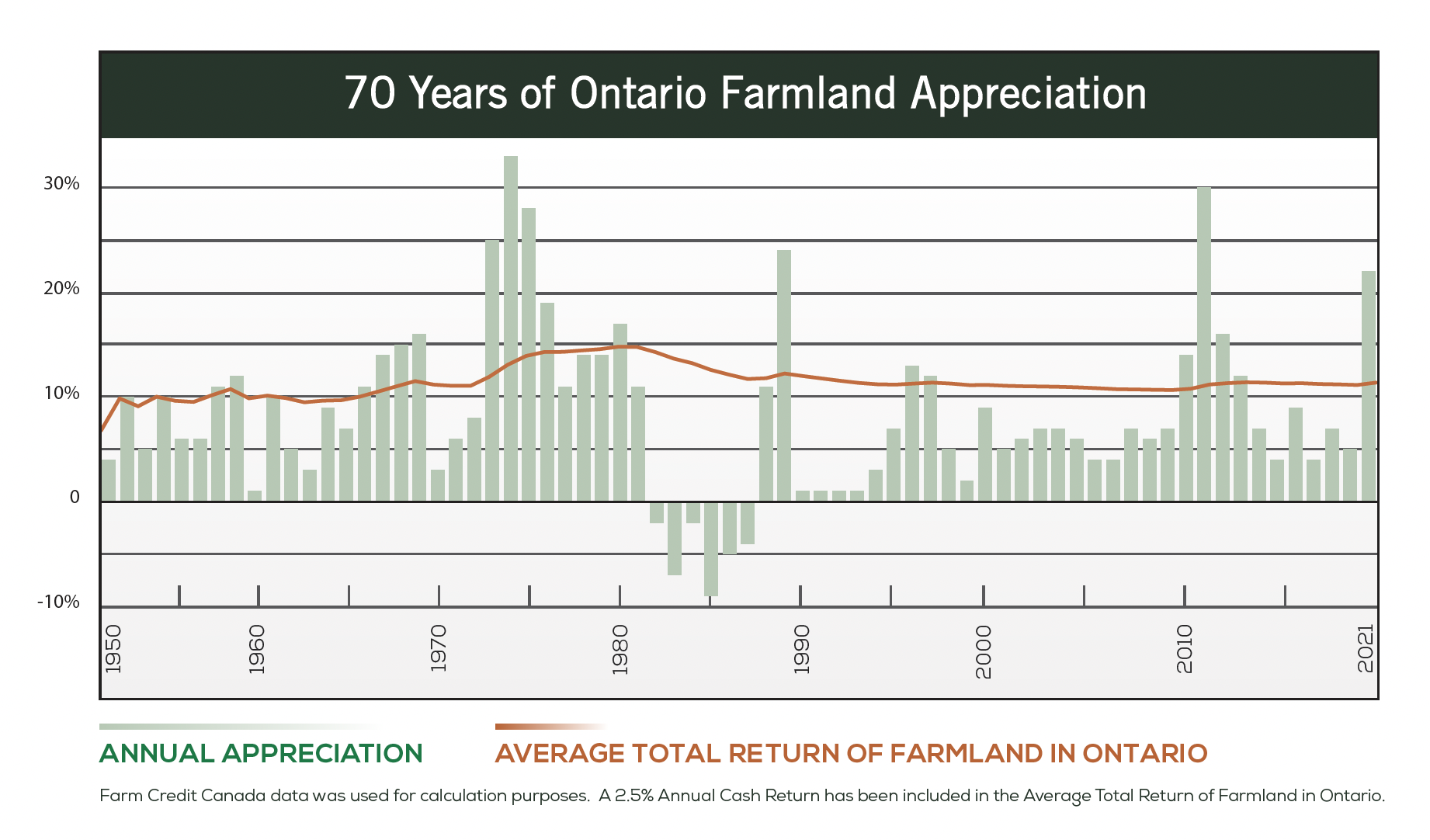 We believe an investment portfolio should include real assets. We sleep easy at AGinvest because we don’t worry about waking up to a sudden increase in interest rates or reduction in money printing. Our investments appreciate based on improving fundamentals and those fundamentals don’t just suddenly change overnight. Improvements in farming technology, farming practices and improvements in biology, have historically led to increases in the value of the farm.

Investing in farmland isn’t about buying low and selling high. It’s about owning an asset that has benefited from improvements in technology and innovation and allowing those returns to compound over time. It is about owning a business with pricing power, and as a result, one of the best assets to own during periods of inflation. Investing in farmland is about owning an asset that isn’t dependent on central bank largesse and isn’t correlated to any of the other assets in your portfolio. We think Ontario farmland belongs in your portfolio and we have 70 years of history that suggests we’re probably on to something.