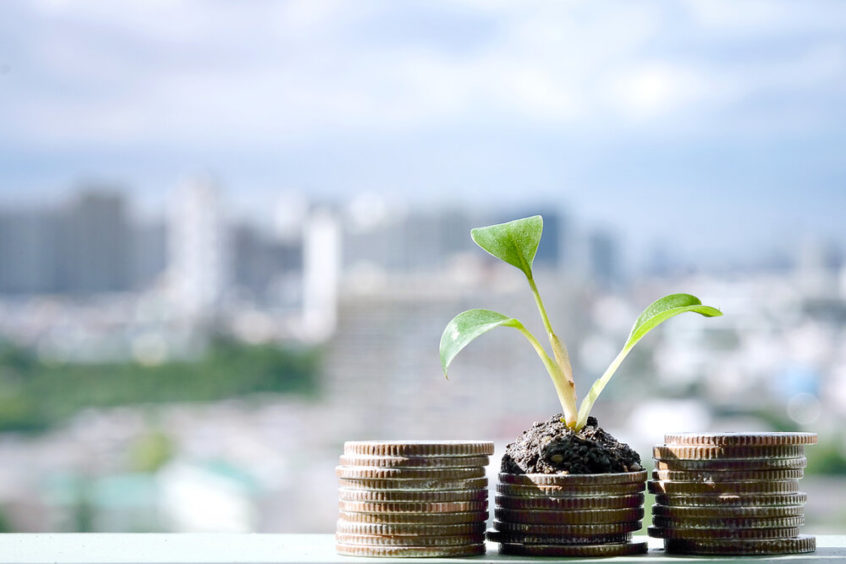 In my introductory note I presented the argument for owning farmland, and specifically, Ontario farmland. To read Part 1, click here. I will present the arguments in a series of notes, but by way of reminder, I would summarize them this way:

I believe investment portfolios should be properly diversified and that the best way to grow and protect wealth is to find productive non-correlated assets. Not long after joining AGinvest, I came across a report that looked at portfolio returns over a 100-year time period, based on quantitative measures. The study found the best portfolio over a long period of time is a well-diversified one that includes more than just stocks and bonds. Large institutions and pension funds in particular, realized that many years ago and over the course of my career I watched many of those funds diversify into a number of different assets. The argument against the 60/40 portfolio, according to the report, is that we have “recency bias” and that we look at the returns from stocks and bonds over the past few decades to project future returns. The report describes the past 40 years as unprecedented and very difficult to repeat. The largest generation in U.S. history (Baby Boomers) was hitting the workforce at the beginning of that period and began to invest their savings in the market. Interest rates peaked in 1981, and ever since, there has been a 39-year downtrend in US and global rates from almost 20% to 0%.  Global debt in 1981 was approximately $14 trillion and is now (pre-pandemic) $265 trillion (19X). During this time, we also saw a move towards globalization, which made many of the multinational companies increasingly profitable as production was moved to lower cost countries and overseas markets developed, as indicated in this report (Link to Report). In fact, this report argues that most of the returns for those assets over the past 100 years were generated during that period.

In order to provide some perspective, I looked at returns on the S&P 500 going back from 1921 to 1982. Ignoring dividend yields (it is difficult to find accurate information going that far back) the CAGR over those 61 years was 4.7%. The comparable analysis for returns during the 37 years from 1983 to 2019, that the report argues were outsized, is 9.4%. The argument then is that some mean reversion should probably be expected going forward. The authors of the report believe that it would be difficult to repeat the performance we’ve seen during this period, given that those conditions have already played out (Boomers may need to sell those investments to fund their retirement years, interest rates are already zero and there seems to be a movement reversing some of the globalization we’ve seen). I would suggest that the tailwinds that markets had at their back, may not be there for the next 40 years.

I mentioned in my introductory note that a number of alternative investments are actually more similar than not. Many investors believe they have diversified portfolios through alternative assets, but it seems to me that a number of these strategies are levered to the economic growth cycle. How differently do you suppose investments in private lending or leveraged loans will perform from a corporate bond portfolio in a recession? The reaction to the COVID-19 pandemic has caused volatility strategies to blow up and private lenders to gate withdrawals citing economic uncertainty as a reason. The metrics for private equity show that this asset class has benefited from the same inflation in valuation multiples and use of cheap debt which helped drive public equities.

There is a great deal of financial engineering that has occurred over the past decade that has made the valuation increase for public equities seem subtle, but when viewed from a wider lens, it becomes more evident. A look at the National Income Account in the U.S. that measures total corporate profits, shows despite hitting a record high in earnings in July of 2014, earnings actually seemed to plateau at the end of 2011. Since then, earnings have mostly been flat or in a tight range.

In addition to the Trump tax cuts and an assortment of “adjusted earnings” or non-GAAP measures, earnings per share were provided a boost through some aggressive use of debt.  Much of that debt was used to buy back companies’ shares. In fact in the three years from 2017 – 2019, there was estimated $2.2 trillion of stock bought back. 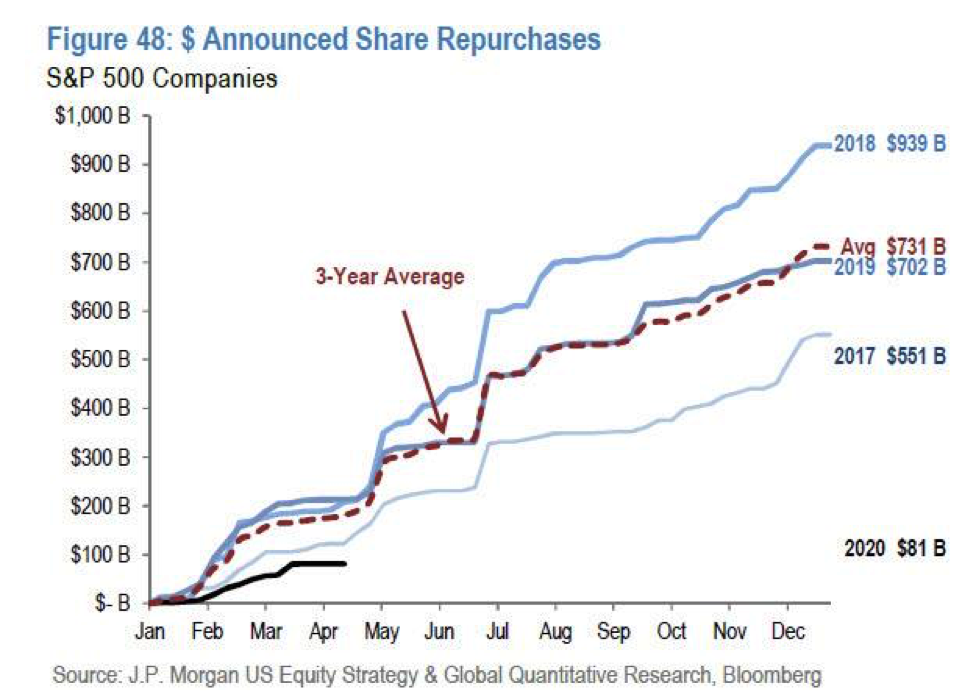 Meanwhile, the capitalization of U.S. equities more than doubled during that same period, going from $15.6 trillion to $37.7 trillion at the end of 2019 (Link to data).

That means the Enterprise Value, or the total value of a company (both its debt and equity) went from just under $20 trillion at the end of 2011 to just over $44 trillion at the end of 2019 for U.S. corporations, except earnings were basically unchanged. This analysis is a generalization that looks at the entire market, and while there were certainly many companies that had actual growth in operating income, buying “the market” (i.e. ETF or index fund) meant you were largely buying into this trend. The cost of buying up the equity and the debt of all public companies (the Enterprise Value) had more than doubled over that eight-year period ending 2019, while the collective earnings hadn’t materially improved.

That increase in valuation without a corresponding increase in fundamentals can be seen when looking at the market capitalization of the equity market as a percentage of GDP. This measure is simply comparing the value of all equities as compared to the underlying economy in which they operate. The chart below shows we had reached a level that marked an all-time high before the correction. The chart clearly shows that the valuation of the market relative to the underlying economy has been rising since the end of 2011. 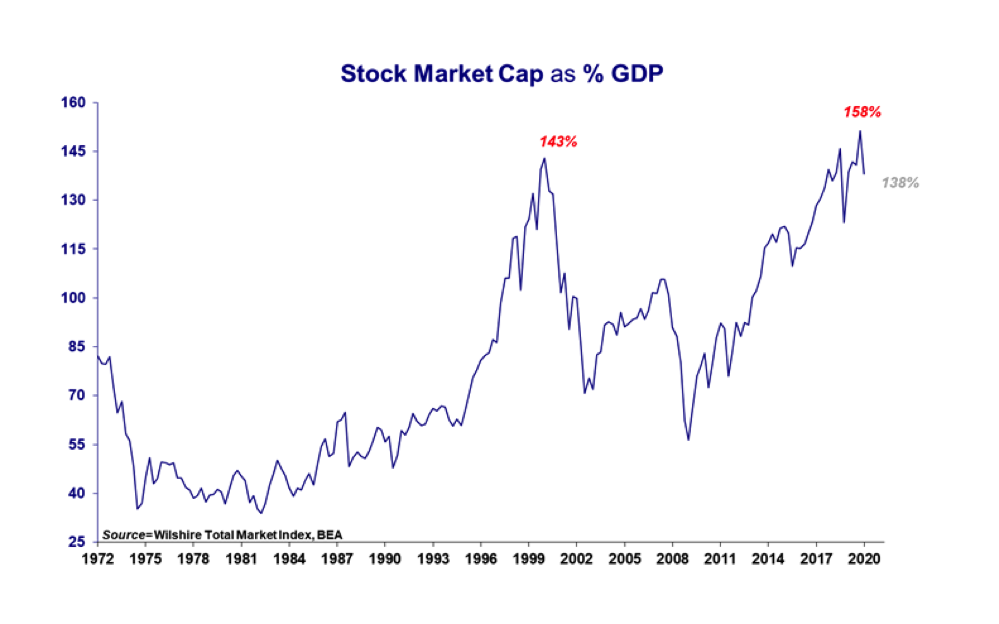 Now I’m not here to tell you equities are expensive, you’ll have to figure that out for yourself. But I am saying that the equity market has had the benefit of a very material increase in valuation (far in excess of any improvement in operating income). That increase in valuations is the result of cheap money made available by the world’s central banks, which has resulted in more money chasing after the same investments (driving multiples higher) and using more leverage with which to do it. The inflation in public equity valuations can also be seen in private equity buyouts.

The chart below shows the impact to multiples when financial crisis/recession hit in 2008, and how it took a few years for valuations to recover. It also shows how valuations tend to increase during an economic cycle and usually hit peaks right the cycle is turning. For those investors in public equities, does this sound familiar??? 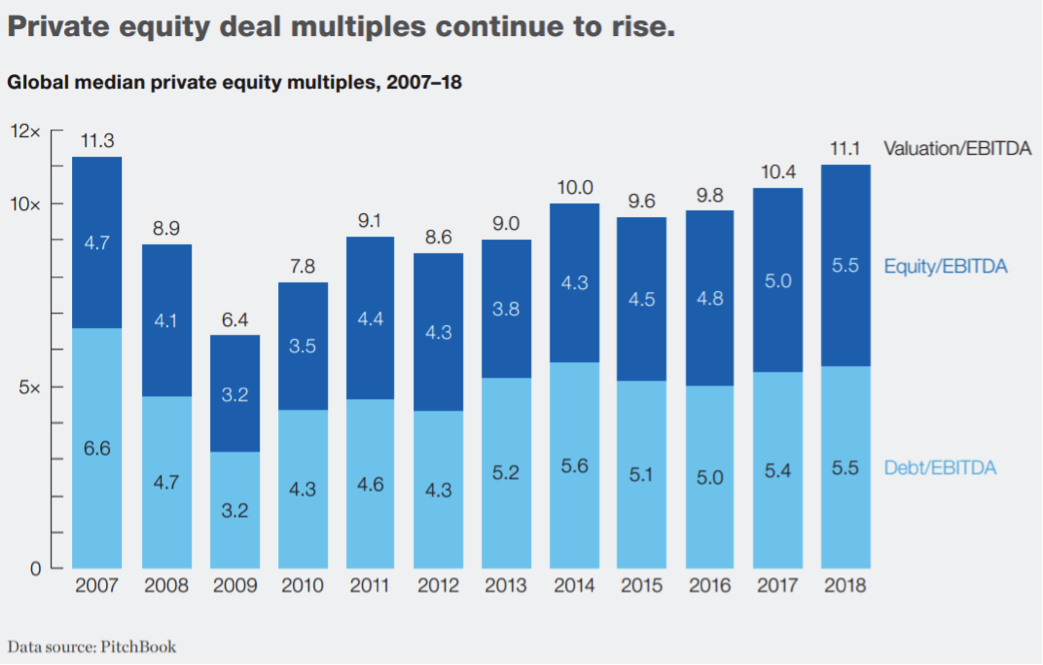 A recent FT article made the point that private equity’s historical success in the 1980s and 1990s came from using debt to buy small companies in a private market at valuations that were significantly discounted relative to public equity markets, but that is no longer the case. In fact, the average private equity company is bought at a 12X multiple of EBITDA (often an “adjusted EBITDA” which overstates the profitability, but makes it easier to sell the associated debt). So now, rather than being undervalued, valuations are in line with the S&P 500. 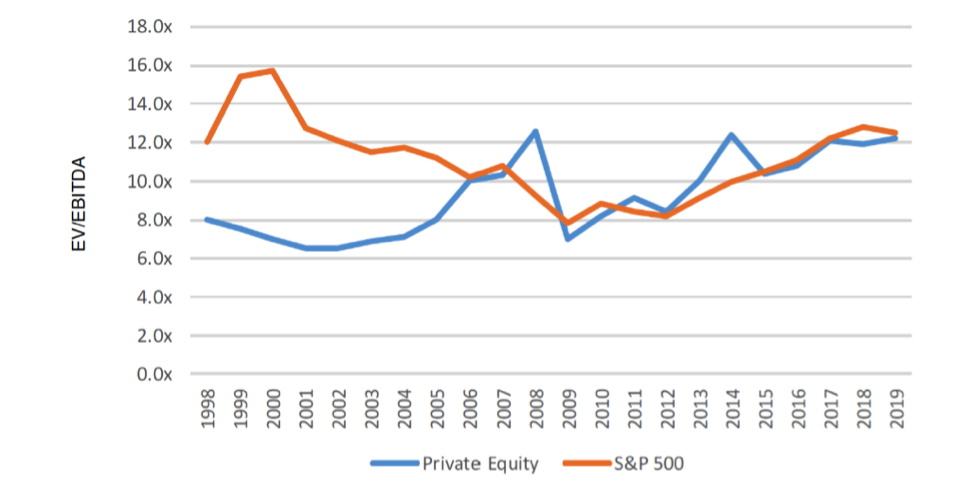 Valuations for leveraged buyouts have seen a similar trend, as you can see below: 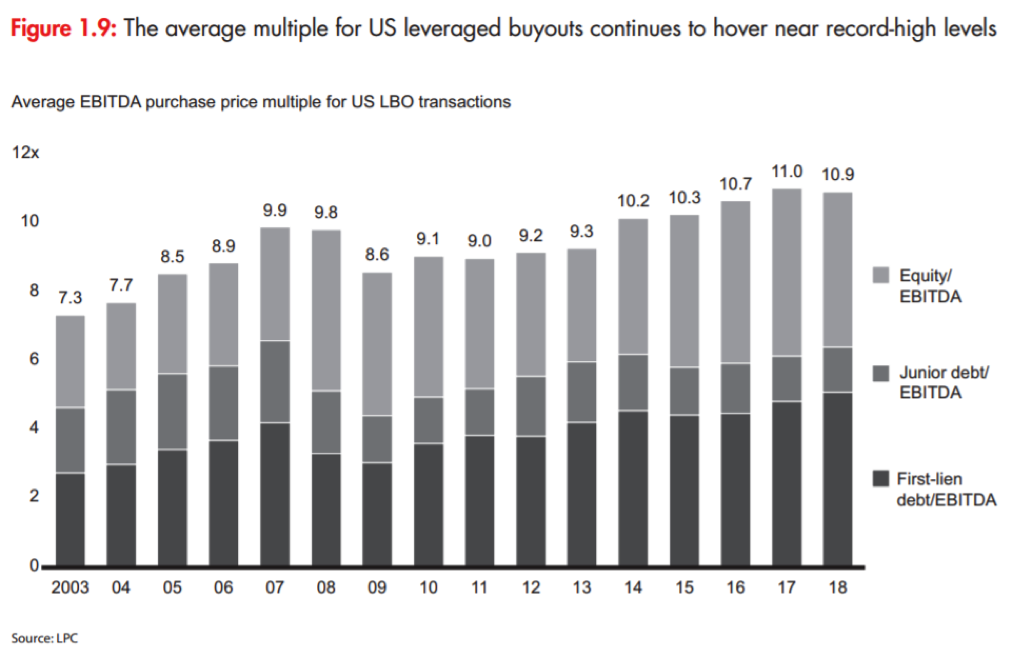 The fallout from the global pandemic may have a longer term impact on these valuations and the ability of firms to manage levered balance sheets, but the volatility we’re experiencing will likely expose a number of the other “alternatives” strategies that rely on debt or equity instruments. Many of these alternative assets/funds rely on long-term relationships (credit spreads, volatility, etc.) as part of their investment strategy. The reaction to the pandemic and the volatility that hit markets, is likely to expose just how vulnerable a great number of these strategies turn out to be. A western Canadian pension manager recently reported a $4 billion loss on a positioned that was meant to benefit from the decreased volatility in markets and in theory should not have been correlated with returns.

The point is, investment strategies that rely on investing in stocks and bonds or even the business of private equity that often depends upon the valuations in public markets as an eventual exit strategy, are all effectively the same trade and provide very little of the diversification required in a portfolio, especially during times of heightened volatility.  The other important point here is that a large part of the returns from these assets have been driven by leverage and higher valuations. The underlying fundamentals haven’t improved enough to keep pace with the increase in prices. When the economic growth cycle ends, they will all be impacted to various degrees and likely not provide the diversification investors believe exist in their portfolios.

Your Portfolio Should Include Some True Diversification

Earlier I mentioned a likely reversion to mean for returns from public equities, given the performance that followed the peak in interest rates in 1981. In fact, it may be that we are already seeing the signs of slowing returns in equities, especially if the unprecedented monetary stimulus hadn’t been applied. Meanwhile, farmland is increasingly benefiting from the innovations that are allowing for gains in productivity and yields from the land. Over the 20 years since the turn of the century, we have seen lower returns for the S&P 500 than the 100-year CAGR, while returns on farmland have actually begun to accelerate and outpace their 100-year CAGR. I would argue that much of that increase can be traced back to the increased productivity per acre of farmland and I will elaborate on that in future notes.

The reason for running through all of this is to show just how much the impact of lower rates, aggressive use of debt and higher valuation multiples (typically seen towards the end of economic cycles) have impacted many different assets. In spite of that tailwind from higher leverage and higher valuation multiples, farmland dramatically outperformed many of these asset classes and did it so without the benefit of any of those levers. In future notes I will try to explain some of the characteristics that attracted us to Ontario farmland.

But I will leave you with a comment from a farmer I recently met that is currently farming on one of our AGinvest properties. The gentleman has been a farmer for a number of years and grows a variety of vegetables, including bell peppers. I asked him about yields per acre from 20 years ago in comparison to today. According to him, an acre of land would yield him 10-11,000 lbs of peppers 20 years ago. Today, he expects to yield anywhere between 25-30,000 lbs of peppers on that acre of land. He showed me some of the mechanical innovation that helped contribute to that, and explained some of the technologies being implemented that will help him increase yields in the future. That increase he has experienced might explain the reason for such strong gains in value over the past 20 years. It didn’t involve any buybacks, use of leverage or non-GAAP accounting. It’s an asset that produces more with minimal increase in inputs. I would call that the definition of “wealth creation”.