I was fortunate enough to spend the first 25 years of my career working closely with some of the country’s smartest investors and was able to sit in on hundreds of meetings with them. Many of them helped me formulate my investment approach and the framework through which I evaluate an investment. After all these years, I have heard almost every investment question asked by investors, so I’m not surprised by any of the questions asked of me and our team at AGinvest about farmland. But I have come to realize that this asset is so different from everything else most investors have come across, that most investors don’t really know how to analyze it. They use their existing investment template and ask the questions they have asked for years. So, I thought it might be useful to explain the asset as an investment to those investors, after all, I have been on both sides of the table and understand what they are thinking from their questions.

I was recently reminded that 20 years ago, the thought of owning physical real estate as part of a portfolio was only embraced by large institutional investors.  It took a few years for the high net worth investors and those looking after their portfolios to add the asset to their investment portfolio. Today, any large investment portfolio and high net worth investor realizes they should own some real estate as part of a well-diversified portfolio. I would argue that farmland will soon be recognized as the bedrock of a portfolio given how well it has performed for almost a century and throughout economic cycles. The pandemic has exposed the vulnerability of many investments and has proven the resiliency of farmland value. I refer to it as the bedrock of a portfolio because it is so essential and indispensable to society, that it does not come with the obsolescence risk of many companies and assets. It has outperformed most other asset classes over a period of decades and has proven to be possibly the best asset to own during periods of inflation. For investment portfolios with long dated liabilities or portfolios meant to transfer generational wealth, it seems like the perfect holding. The fact that it is not yet held in most portfolios should be viewed as an opportunity to own a vital asset that has outperformed due to fundamentals and not been driven by fund flows.

In a recent blog post, I wrote about the growth profile of farmland and how the yields of farms continue to increase. I pointed out how the improvements in genetics, mechanization, and technology, have all contributed to higher yields and higher efficiencies. Those improvements were effectively capitalized in the price of the farmland. But those improvements were also the reason we have been able to feed the world’s growing population. It was recently announced that here in Canada, Telus is launching an Agriculture Division. In an article describing the initiative, they talk about what many believe will be the next wave of technology to impact agriculture and how it promises to increase yields even further. Among the improvements coming, the article mentions installing internet-connected sensors that can help farmer more precisely monitor the crops. The article quotes a United Nations report that says the world will require 70% more food by 2050 than it did in 2009 as the population rises. The head of Telus Agriculture makes the point that “the fields are not getting bigger”.  In fact, the world loses thousands of arable acres each year which means those fields that remain, will be required to provide bigger yields.

If only we had a NASDAQ listing

In the investment industry, as a portfolio manager grows their assets, they begin to exclude many of the investment opportunities that were available when they managed smaller portfolios. Anyone who has been around the investment industry long enough, has seen an example of an investment manager begin to be less effective as the size of the portfolio grew. We believe the opposite is true of farming. The improvements in technology and mechanization have meant that farm operations have become larger to justify and operate the expensive equipment required that is capable of farming hundreds of acres more than previous generations of tractors. The next wave of technology will likely be even more expensive and will force operations to become even larger.  That consolidation will bring obvious economies of scale from buying fertilizers and other inputs cheaper, but it will also mean additional revenue opportunities. As farm operations become large enough, those large operators will now have the scale to package their vegetables and sell directly into the retail channel. 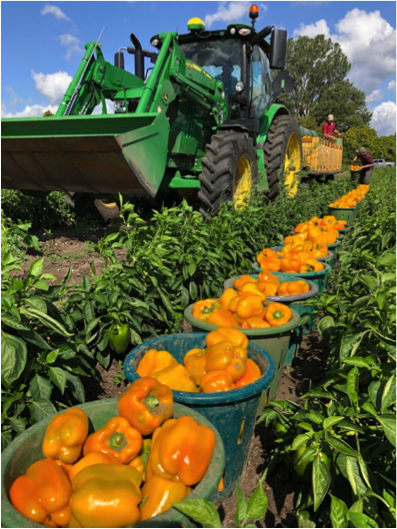 A recent visit to one of our farms helped me to understand just how big an opportunity exists. I had recently been grocery shopping at a Loblaw-owned store and saw bell peppers selling for $3.99/lb. That price stuck in my head since I knew I was visiting one of our farms and meeting with the farmer who had planted bell peppers on it. When I met with the farmer, I asked how much he had received for this year’s crop. It turns out the farmer sold the bell peppers to his buyer for only $0.24/lb.  The supermarket certainly didn’t mark up the peppers by $3.75/lb. They don’t have those types of margins. In other words, besides the obvious economies of scale from buying fertilizers and other inputs cheaper, there is a great deal of revenue opportunity available for a large-scale farm operation that can add packaging and distribution. If this were a tech stock and I outlined the path to a >10X revenue increase, investors would be climbing over each other to invest, but it’s just boring old farmland.

What about the liquidity???

Many of us are constantly reading about how to be better investors and to learn what successful investors have done to derive their success. Most of us have read about the power of compounding, but very few have it front of mind when we are evaluating an investment. Warren Buffett is the richest investor of all time. But he’s not actually the greatest – at least not when measured by average annual returns. Buffett’s success is that he generated consistent returns over a very long period and remained invested the entire time. Compounding isn’t intuitive so we often ignore its potential. Ontario farmland has generated a CAGR (compound annual growth rate) of over 8% for more than 70 years. If you had invested $100 in Ontario farmland in 1950, it would have been worth more than $22,400 at the beginning of 2020 (the same $100 invested in the S&P500 would have been worth just over $19,400).  The trick of course, is that you needed to remain invested. It’s understandable that people would devote all their effort to trying to earn the highest investment returns and intuitively, that would seem like the best way to become wealthy. But good investing isn’t necessarily about earning the highest return, because the highest returns tend to be one-off hits that can’t be repeated. It’s about earning pretty good returns that you can stick with and which can be repeated for the longest period of time.  That’s when compounding runs wild [1]

The issue of inflation should also be top of mind

No current investor in the market today has ever invested in an environment like this one. We have debt levels and increases in money supply “the likes of which, nobody has ever seen before” (a little “Trumpism” for you, since he won’t be around to quote much longer :). Historically, the solution to a huge debt problem has been to inflate our way out.  The response to the past two crises should provide some insight into how this will be dealt with. These numbers would suggest inflation is coming, even as measured by the fraudulent CPI.  It is already being seen in the price of financial assets and even in real assets. 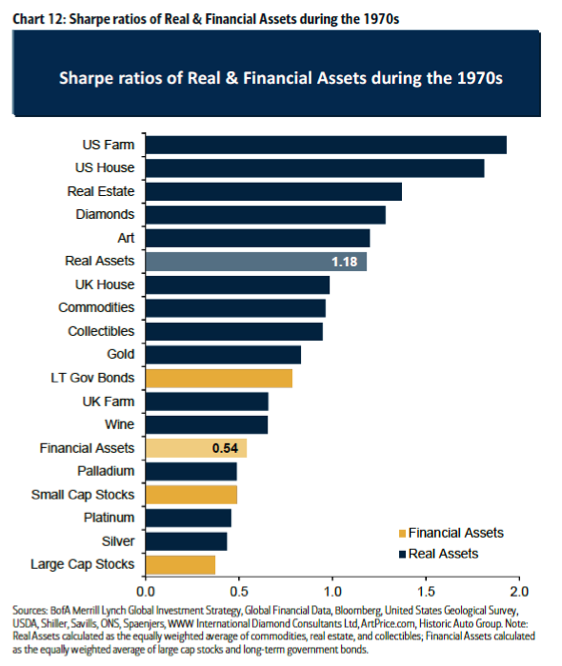 I have referenced it before, but a report from B of A Merrill Lynch Global Strategist, Michael Hartnett, on real assets, looked at the performance of these assets during previous periods of inflation. It found that farmland was the best performing asset.  His report also found that the next best performing asset was housing. I would suggest that the price increases we are seeing in housing, might just be a sign of that inflation beginning to occur. 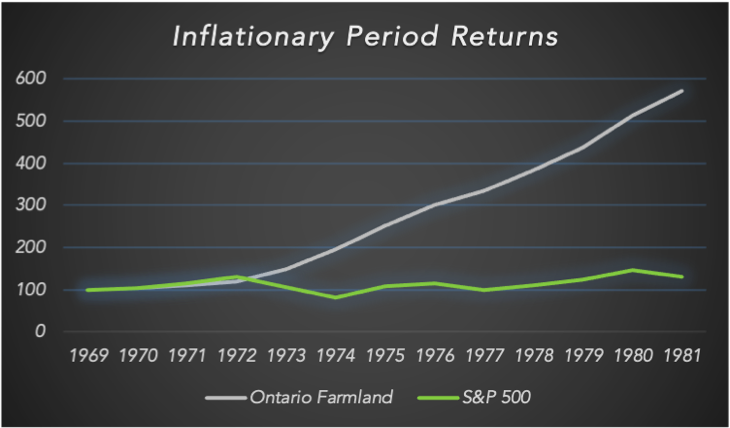 Bedrock of the portfolio

We think farmland is a unique asset class that has not yet been discovered and is certainly not well understood. It has generated consistent returns over time and provided a great hedge against inflation. Those returns have been almost entirely un-correlated to the returns of most other asset classes. The ongoing improvements will mean it becomes more and more productive and the consolidation will mean economies of scale and the potential for material revenue growth. We believe it makes a great base for an investment portfolio that does not require the constant tinkering that investors do with stocks and bonds. And much like real estate has become an essential component of investment portfolios, farmland will soon play that same role, but with greater resiliency and growth.

[1] The Psychology of Money by Morgan Housel 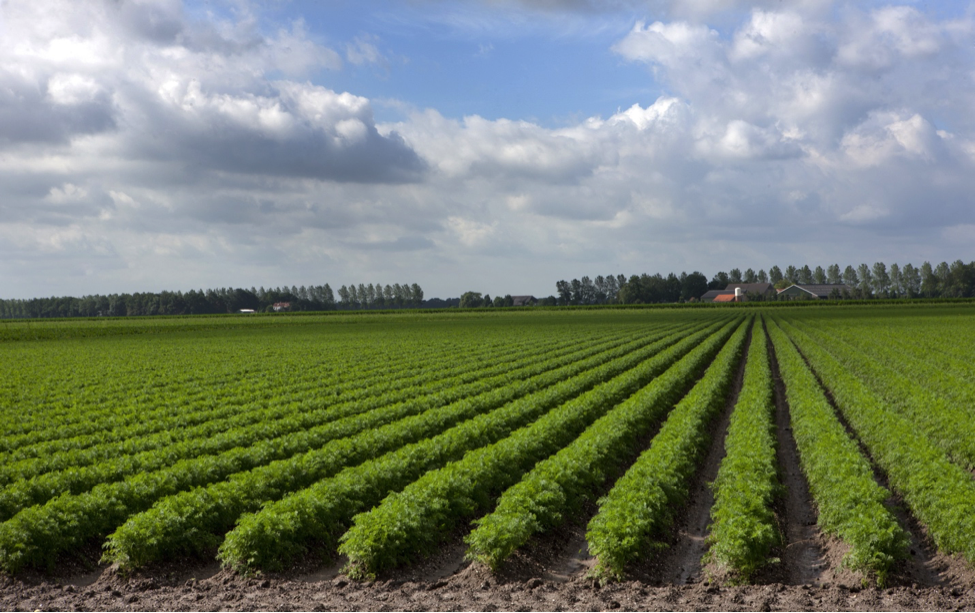