We have spent a lot of time focusing on the outperformance of farmland during periods of inflation. The consensus view is that the incessant money printing will continue to drive inflation that can already be seen in asset and commodity prices. But this year, another potential catalyst for higher food prices might just be drought conditions that have gripped much of North America. The drought conditions are already an issue and crops have barely been put in the ground. Last month, CBS News reported the Western US may be entering its most severe drought in modern history with some scientists saying “the region is on the precipice of permanent drought”. They say the Western U.S. entered the beginning of what scientists call a megadrought – the second worst in 1,200 years – triggered by a combination of a natural dry cycle and human-caused climate change. They note that in the past 20 years, the two worst stretches of drought came in 2003 and 2013, but what is happening right now appears to be the beginning stages of something even more severe.

The US Drought Monitor places 60% of the Western states under severe, extreme, or exceptional drought. The difference this year from the past 20 years, is the area of “exceptional drought” is far larger than any other spike and as we enter the dry season, there is very little chance conditions will get better – in fact, it will likely only get drier.

The drought has meant that in some parts of California, conditions are so dry that farmers aren’t even bothering to plant crops this season. California grows a third of the country’s vegetables and two-thirds of the country’s fruits and nuts. A cut in such a critical source of America’s food supply seems certain to  cause higher prices. 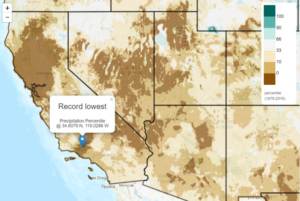 But the problem is not limited to the Western US and climatologists are ringing the drought alarm. Data from NASA shows that millions of acres of farmland, in northern North Dakota and across the border into Manitoba and Saskatchewan, have extremely low soil moisture this spring. In fact, as of the middle of May, NASA rates the soil moisture in the region at the one to two percentile, meaning it could be at its lowest level on record.

According to climatologists, “the dryness is unprecedent, right now…. It is the driest nine-month period on record, since 1985”. This year’s drought is broader than just a lack of rain last fall and minimal snowfall this winter. Many parts of Manitoba, Saskatchewan and North Dakota have received less than normal precipitation for nearly two years. That has left soils, at depth, abnormally dry.

A Canadian agro-climate specialist at Agriculture Canada in Regina, notes “out of 100 years, it’s one of the top-five driest years”. The climatologists suggest it will take many rains this summer to replenish the soil moisture and “it is going to take above normal precipitation for several months”. But the US Climate Prediction Centre is forecasting a warmer than usual June, July, and August for the northern plains, meaning any rain that does fall, is more likely to evaporate. 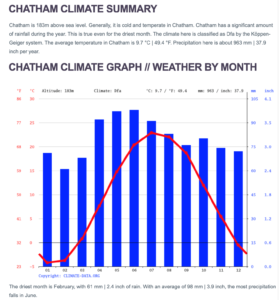 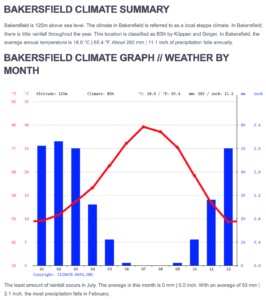 While farmers across much of North America struggle with water/drought issues, most Ontario farms have an abundance of water available. Plentiful rainfall as well as access to large sources of fresh water, means Ontario farmers don’t usually need to worry about water. While rainfall is not usually an issue for our farmers, at AGinvest, we also look to add an additional source of water, wherever possible. 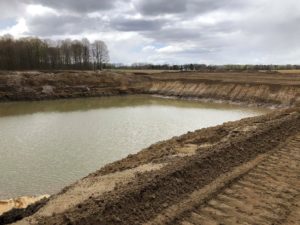 Above is a newly installed irrigation pond on an AGinvest farm

This year’s drought is happening with many commodity prices already at all-time highs. A look back at 2012, the last time we had a serious drought in North America, farmland prices in Ontario were up more than 30% in 2012 and almost 16% in 2013 (according to Farm Credit Canada). While commodity prices receded in the years following that drought, farmland prices continued to rise. Regardless of what happens, we are already seeing record high prices for many crops, and it is happening with record yields in production. Any sort of impact to supply from a possible drought, is likely to only send prices higher.

At AGinvest, we are often asked about acquiring farmland in other regions of Canada and even outside of Canada. We believe we are sitting on some of the best farmland in the world here in Ontario. It should be obvious that without water, even the best soil does not make for valuable farmland. We believe this water advantage will become even more valuable as other regions deal with water challenges and food supplies are threatened. We are surrounded by the great lakes and blessed with an abundance of rainwater. With many of the farms we acquire, we actually need to tile the land to take away the excess water. A nice problem to have. Latitudinally we are equal to northern California and we are a one-day truck drive to some 100 million people. So, while the rest of North America deals with this season’s drought and an uncertain future for their water supply, we feel our little slice of the world’s farmland supply is looking more secure and more valuable every day. The next time you are walking through the produce section and seeing higher prices, just remember what is causing it, which region is managing the challenge well and realizing the economic benefit of it.